Quebec – Marc Samson, a contemporary artist located in Montreal, Quebec, working to advance his expressive, color-filled artistry on a variety of mediums, this week received a large-scale feature on Magazin’art for his dynamic artistic pieces that are unmistakably his own.

Born in Sherbrooke, Quebec in 1965, Samson grew up surrounded by art, colours, and athleticism. His father, a residential and commercial painter, instilled a love for sports and expressive colours in Samson at a young age. His mother, too, was involved with art, sketching drawings that emanated an obvious talent.

“I used to be absolutely awestruck watching my father mix different paints together to arrive at the perfect hue,” said Samson. “I was surrounded by artistic expression on all sides, which is why it’s no wonder that I pursue the level of artistry I do today.”

Like his brother, Samson developed his athletic skills and competed for the Canadian National Team on the 110 m hurdles during the early 90s. During this time, he met his mentor, Terrence Greer, and ex-teacher of the Academy of Art in London.

Today, Samson’s pieces showcase obvious influences from Matisse, Modigliani, and Cathelin. His works embody an evident flair for colours, composition, and textures that feel life-like. Additionally, his athletic past can be witnessed within the bold movement and assertive strokes that comprise his finished works.

“I’ve moved more into a minimalist and realist painting style as of recently,” said Samon. “Using mixed media to enhance my subjects, I wish to produce irregular effects on the multiple layers of colour I use to bring forward the essence of the piece. I want to thank Magazin’art for my latest feature, and hope to continue inspiring artists across Quebec today.”

From Marc:
I am proud to inform you that the edition # 116 of MAGAZIN’ART is ready. The writer, Lisanne Le Tellier, did an outstanding job in describing my work and techniques that I use. There is an article in French and the same translated in English; both three page-long. I have also a total of eight pieces exposed. Quite an honour.! Starting this Monday, June 12th, you will find the magazine in most kiosks across Canada, United-States and Europe (mostly in France). 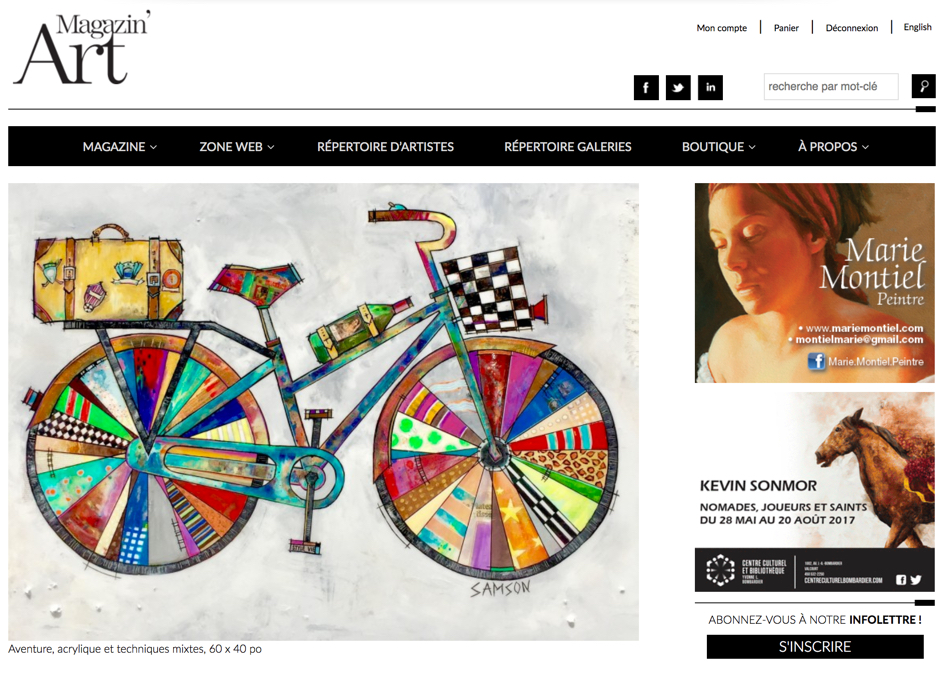