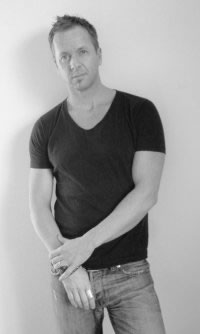 Born in Sherbrooke, Quebec in 1965, contemporary artist Marc Samson grew up surrounded with art, colours and athleticism…  It was part of his day-to-day life.  His father was passionate in everything he did.  He was involved in all sports and was an expert in colours; his profession being a residential and commercial painter.  “I remember how captivated I was when I was watching my father mixing half a dozen of paint together to create the perfect hue”…  His mother would often draw sketches that showed an obvious talent…  Her childhood dream was to become a fashion designer…  His sister was also an instinctive talented artist that had a direct effect on him becoming an artist…

Following the steps of his older brother, Marc became an athlete and competed for the Canadian National Team on the 110 m hurdles in the early 90’s…  Meeting his mentor, Terrence Greer, ex-teacher at the Academy of Art in London, UK, was a major stride in the evolution of his art…  “Terrence constantly pushed me to get out of my comfort zone by trying new things, new challenges, new ways… without telling me how to…”

His early pieces (influenced by Matisse, Modigliani and Cathelin) confirm an evident flair for colours, composition and textures.  Also, his background in sports is clearly defined into his art with movement, boldness and assertive strokes.

His latest contemporary work is characterized by minimalism and nearly realist… he uses mixed media (oil, acrylic and other materials) to enhance his subject and carry irregular effects to the multiple layers of colour.